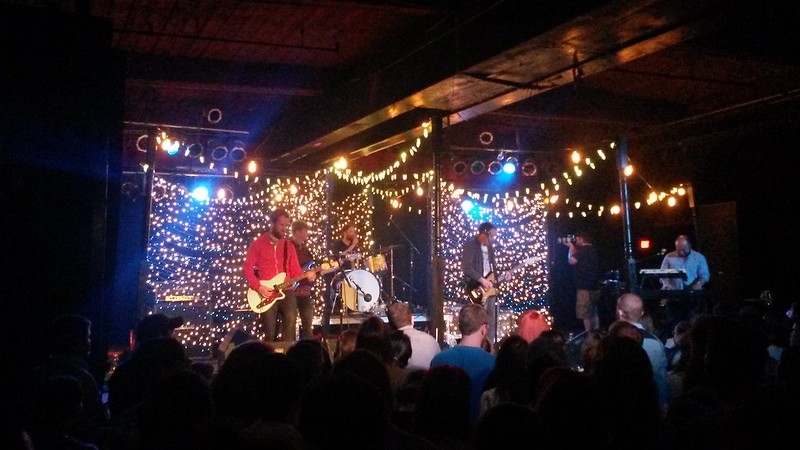 In 2006, I posted about how a concert reenergized me when I was weary. I wrote that before I had children and truly learned the meaning of tired. The band was MAE and the album they were performing was The Everglow, my favorite album from the year 2005 and maybe one of my all-time favorite albums. Only a few years later, the band lost momentum and faded away. I had good memories from the concert, but I didn’t think I would ever hear those songs in concert again.

Surprise, surprise, the band reunited, all 5 members from the album, and announced they would tour and play the entire album from beginning to end. As it turned out, our own group reunited for the show. Jerry and I were no-brainers for the show, but to our delight Chuck even traveled from Tennessee and it was the same as the 2006 show even if we are a little longer in the tooth.

We used to eat a Jaqbo’s over by Georgia Tech when I was in school, but that is long-gone. In it’s place is a “little Italy” section with a pizzeria, gelato store, bar, and open seafood grill. We enjoyed Antico, where the room is as bare-bones as possible, we sat on a large metal bench and ate pizza right off the pan. On the other side of the large room were the large ovens and kitchen staff that cheered loudly when Pachuca scored a goal.

After the delicious dinner, we made the short dash over to The Masquerade. If anything hasn’t changed in the last ten years, it is The Masquerade. It is still as dark and terrifying as ever with it’s random mill equipment still hanging from the ceiling and mysterious dark corners that I don’t want to know what is hiding there. The concert was in the top floor, the “heaven” part of the venue, the exact same location as the 2006 show. It’s not uncommon for The Masquerade to have more than one show at the same time and I joked that there is probably a death-metal band in the “Hell” part of the venue and the fans there would be waiting to beat us up before or after the show, but there was only one show that night.

Mike Mains and the Branches opened the show and while they lacked a little bit of the “anything could happen here” vibe they had at Cornerstone, they were still really fun. They played a couple songs from each of their two albums and I was familiar with just about everything they played and sang along. The second band was All Get Out and they really weren’t my thing and I didn’t know any of their songs so I kinda checked out while they played. I would have greatly preferred that they were the first band and Mike Mains and the Branches got the second longer set.

Finally, MAE took the stage. I really liked their stage setup with posts and Christmas lights strung up between the posts. The light gave the appearance of tiny stars behind them and changed a couple of different colors for a couple different moods. They started with a couple more recent songs, but it wasn’t until they started the intro to The Everglow that the room figuratively and literally lit up. The crowd was in it from the start, singing loudly as the band went into “Someone Else’s Arms.” Dave Elkins declared “MAE is for lovers!” and perhaps he was right as there were plenty of couples arm-in-arm in crowd. The girl next to me wiped away tears at the end of “The Ocean” as she pressed into her beau’s side and who could blame her? It was beautiful. “Breakdown” had a great moment where the girls and guys in the crowd each sang a different part and it made a great 3 part melody. After the band wound down “The Sun and the Moon” they exited the stage to the “The Epilogue.” They came back for a short encore before the night was done.

The show was a little uneven, the Everglow material sounded a little more polished than the rest of the set, but that’s the part I wanted to hear so I left pleased. The best part is that the band is together and touring again and I’m hoping this means there will be new music in the future. There have been so many endings when it comes to my favorite music that I would welcome some beginnings and renewals.