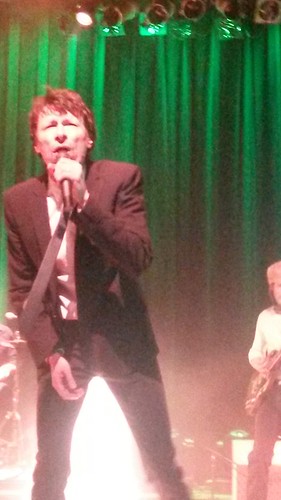 Steve Taylor hasn’t played a show in Atlanta in twenty years. The last time he was here, Bill Clinton was president and Nirvana was dominating the airwaves. While that’s a long time, it’s not as if Taylor has been slumbering. When he has not co-written songs for other bands, he directed Don Miller’s movie adaption of Blue Like Jazz, but Wednesday night he was doing what he does best. Taylor’s acerbic lyrics have always found home in a variety of musical styles, first in Bowie-esque New Wave and later the very grunge sound that the aforementioned Nirvana brought to the radio. He brought a new collection of songs from his new album, also his first in 20 years, to go alongside his classics. For me the new songs all sound a little bit the same, but Taylor’s wit has not diminished one bit and the sound, well it rocks and that seems to be an increasingly rare thing these days. The rocking sound comes from a band that is an all-star super group. John Mark Painter of the duo Fleming and John played bass, along with some saxophone (a long missed and vital part of Taylor’s music) and even french horn. Guitarist Jimmy Abegg has been associated with a variety of artists including Rich Mullins, Charlie Peacock, and even his band Vector in the 80’s. He may look like a homeless man, but he added a nice biting edge of guitar. Former Newsboys front man Peter Furler played drums.

The set list was a mix of the new album combined with some classics, including the cover-of-a-cover “I Want To Be A Clone” and “Moshing Floor” which was kinda funny because everyone in the crowd was too old to mosh. Taylor finished the night up with his newest epic “Comedian.” The encore of the evening was a tounge-in-cheek rendition of Beyonce’s “Single Ladies” which led directly into “Cash Cow” and he finished the night with a serious song, “Hero.” All through the night, Taylor was ageless. He may not do cartwheels across the stage anymore, but the leaped and spun like a man who hasn’t aged in twenty years. I know I was more tired than he appeared to be at the end of the show.

Peter Furler opened the night with his three piece band. None of his new songs stood out to me, but it was fun to hear him cover some old Newsboys songs like “Not Ashamed” and “Shine”. The songs were fun to hear again and had a very different take with a raw power-trio with all of the drum machines and backing tracks stripped away. Perhaps the best old Newsboys cover that fit his new sound was “Lost the Plot” which remained powerful and loud. While the Newsboys have always seemed a little phoney, Furler was soft spoken and authentic, he seemed to enjoy the smaller crowd and simpler vibe.

So many of my favorite musicians have changed so much in twenty years, and many not for the better. Taylor however seems to be trying to pick up where he left off and while he does have some momentum to regain after being away for so long, his return to the music scene is a very welcome one and I hope there are more tours and more albums to come from here.