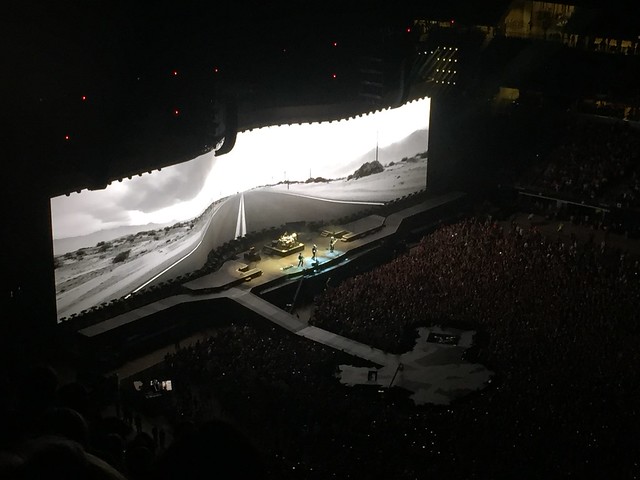 Most of my early pop musical choices were influenced by girls. Of course they were. Once in middle school I asked a girl that was sitting across from me what she was listening to on her headphones. “Kansas,” she said, “do you like them?” YEAH I DO. *goes out and buys The Best of Kansas on cassette the next day.* I remember in middle school there was this one girl that exuded coolness. She wasn’t pretty like the cheerleaders but she had an aura around her of someone who was confident in who she was. She had a denim jacket and it had all of these buttons on it of all these bands that weren’t really on the radio much but had these crazy names. The Cure. The Alarm. Midnight Oil. She had a button with a white flag and the two characters “U” and “2”. I wanted to know about these bands.

The album The Joshua Tree came out and the band U2 went from being “the band the cool kids knew about” to “the band everyone knew about” and their songs were all over the radio. I loved the album. I was on board. I was with them until the 90’s when I drifted away. It took another girl, my wife, to pull me back in and appreciate Achtung Baby!, Zooropa, and Pop. All That You Can’t Leave Behind was released just a couple weeks before our wedding and we played the album driving around in our rental car on our honeymoon. The Elevation tour wrapped it’s arms around us after September 11 attacks. We were five feet from the stage on the Vertigo tour. Then, the U2 360 Tour happened and I had a gnawing feeling in my gut that maybe they were getting a step slower, maybe they had finally peaked.

Nagging feelings aside, when U2 announced a tour to commemorate the 30th Anniversary of The Joshua Tree I knew I wanted to see it. I wanted to be there to hear the whole album, the one that got me hooked on U2, from beginning to end. There was no show in Atlanta so Adriene and I had to figure out if we could make a trip somewhere work. As it turned out, many of friends from my days of going to Cornerstone Festival decided to meetup at the show in Dallas since that was close to where many of them lived in Austin. We hadn’t been to a concert together and made terrible jokes in some five years. It didn’t even matter that our seats were in the upper deck, some five rows beneath the rafters of the gigantic stadium for the Dallas Cowboys.

What a gigantic stadium it was, the sound echoed and bounced all around the cavernous stadium, particularly during the openers, The Lumineers, when there were more empty seats. By the time U2 started though, the stadium was full and the sound improved a little bit. The band started out setting up the Joshua Tree album with a couple of old hits playing on a small “b stage” shaped like the tree in the middle of the crowd. Up to this point, the gigantic video screen behind them had gone unused, but once they started into “Where the Streets Have No Name” the background went red and orange bringing back memories of the moment the “Rattle and Hum” video went to color and then the screen exploded into life behind them. I have to admit it was a little weird to have the climax of the album at the front and it did feel a little like this section of the show peaked with the first song, but every song on this album is a classic. There were some interesting arrangements, “Red Hill Mining Town” and “Trip Through Your Wires” were songs that were rarely (if ever) played in concert were changed up. “Bullet the Blue Sky” was played a little more straightforward. I expected Bono to summon down fire during this song with a sermon, but he was in a unifying mood tonight, more interested in bringing America together than taking it’s faults head on. “Exit” brought forth some fury but “Mothers of the Disappeared” was the most emotional song of the night for me as it brought the album to a close with some beautiful imagery on the screen.

Bono then announced that the show was moving into “the future” and “women are the future” as the screen told the story of a Syrian refugee girl during “Miss Sarajevo” and then pictures of famous women flashed on the screen during “Ultraviolet.” I have to admit though, I try to do a decent job keeping up with current events and many of the women (I’m guessing by their names involved in politics in the Far East) I did not know. I’m sure it was not a coincidence though that in the deep red heart of Texas the image of Hillary Clinton was accompanied by Laura Bush. Before the song “One”, Bono made special mention of the Bush family and George W Bush’s efforts as president to provide funding for AIDs medication which has saved an estimated 18 million lives in Africa.

A second encore followed with a brilliantly colorful “Beautiful Day” followed by “Elevation” before the band called an audible. Normally this was the spot for their new song they had been doing on their tour but they decided to play “I Will Follow” instead. Afterwards, it seemed like there was a little confusion, I was sure they would come back for another encore but awkwardly after a few minutes the house lights came up and that was that for a little bit of an unsatisfying conclusion.

I can’t really complain though, the band was a tight as ever. Adam and Larry were in lockstep for the show, not really showcasing too much. Larry got his traditional intro at the start of the show with “Sunday Bloody Sunday” and Adam thudded through “Exit” with some intensity. The Edge seared through solos, probably his high point of the evening was “Bullet the Blue Sky” for me. Bono sounded better than I’ve heard him in a long time. He didn’t take on some of the screaming high notes in songs like “Red Hill Mining Town” but otherwise he hit everything he intended to.

The Joshua Tree came out near the end of Reagan’s term as president and many of the songs tackle America at that period, both the good and the bad. I thought U2 might take on our current America with some updating of the songs and to some extent they did, but Bono was more interested in unifying the crowd tonight. He made sure to mention that as Irishmen, they were guests in our country and still appreciated it. He didn’t mention our current president once, but made sure to thank George W Bush as noted earlier and made nods to the women’s march and the Syrian refugee crisis. The band didn’t deviate from the plan much, my friend Jerry who was on the floor for the show noted that almost everything was read from a teleprompter so this was a U2 that was unusually scripted. But who can complain? A band nearing their 40th year that usually doesn’t dwell on nostalgia too much can be forgiven if they look back on the time when the became the world’s biggest band and want to share some good memories with us.