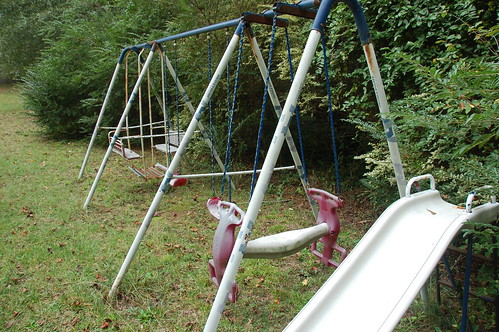 When we bought our house it came with a playground. We meticulously went over all the things we wanted fixed and changed with the house before we bought it, but somehow we forgot about the playground. So, after the got the keys we looked in the backyard and said, “Aren’t you taking the playground with you?” The old owners of the house laughed and said, “No! The whole house and backyard is your problem now!” and peeled out of the driveway. (Well, that’s how I imagined that it happened in my head.) So we had no kids, but we had a house with a playground. For a while when we we young it was pretty funny. We, the couple that had no interest in having kids, had an awesome playground. Later, when we decided we did want to have children but couldn’t, it wasn’t as funny. Eventually, though, children did arrive and it wasn’t long before the playground earned it’s keep. “Why don’t you go out and play on the playground for a while” was code for “mommy and/or daddy have had enough.” It was social central, where the girls would congregate and talk even they just idly sat on the swings.

As it does, time passes. The playground began get a lot of rust and started to appear structurally questionable. We decided it was time to have it removed and I told the girls to play on it one last time. They were sad, but as they swung back and forth, I nervously watched as they lifted the legs of the swing set right off the ground. They were too big for it and I really didn’t want to take a trip to the hospital, so it was the right call to have it removed.

I’ve made a lot of posts about the passage of time and how my children are getting older and nostalgia and such, but I’m trying to look at this change from a positive view. The back yard is now empty and full of opportunities. We can put up a hammock. We can put up a soccer net, or as Erin insists a lacrosse net, and we can practice in our own backyard. Maybe we’ll clear out the annoying privet hedges and give ourselves more space. We’re just about to start winter, but I’m already thinking ahead to summer of 2016 and the possibilities for our family.